Stiltsville Houses: The Early Days of Rum Runners and Gamblers

The history of the Stiltsville houses, located in Biscayne National Park, proves to be as interesting as it’s allure. Most local historians agree there were as many as 12 “shacks” on the Biscayne “flats” as early as 1922, serving as an outpost for smugglers during prohibition, but the first of a string of iconic houses was built in 1933 by the legendary “Crawfish Eddy”, who allegedly used the sale of beer and fishing supplies as a front for a gambling operation, at that time legal one mile offshore. Crawfish Eddy’s shack became the “go to” over the water hideaway during the post prohibition era for those wanting to stay off the radar of local law enforcement. (Although some old timers will tell you, local law enforcement not only knew about the hideaway, but paid off-duty visits quite often.

By the late 1930’s Stiltsville had started to attract Miami’s elite and invite-only clubs like the Calvert Club and later the Quarterdeck club were established. With it’s bar, lounge and jet-set clientele, the Calvert Club quickly became not only a tourist attraction but a the VIP social mecca of Miami. The Quarterdeck club was built in 1941 as an invite-only gentlemen’s club by local fisherman and was featured in an issue of Life Magazine. Florida’s governor, LeRoy Collins spent time in Stiltsville in the 1950’s along with local politicians who frequented the houses. 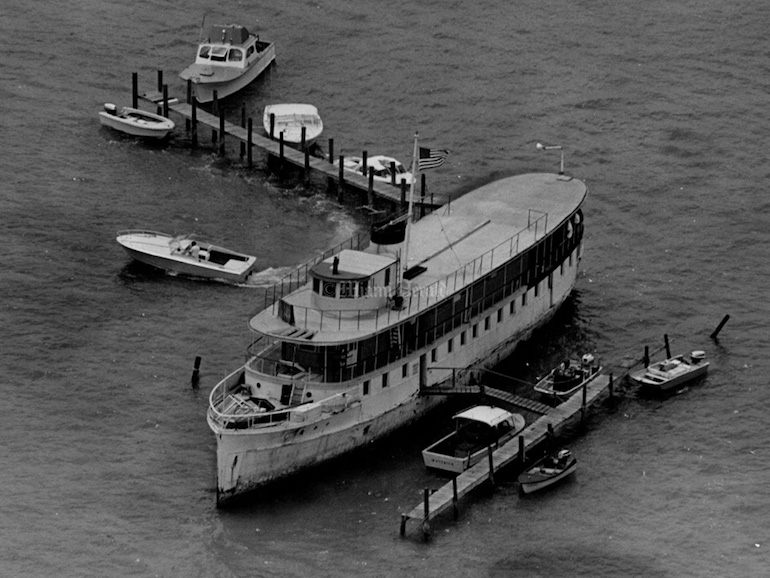 The Heyday of Stiltsville Houses: A Remote Hideaway for Miami’s Elite

During its heyday in the 1950’s and 60’s there were about 27 houses in Stiltsville, the Shangri La and Bikini clubs were popular watering holes and in the case of the Bikini club, somewhat illicit.

A local con man, Harry Churchville, grounded a 150’ yacht along the shallows of Stiltsville, dubbed it the Bikini Club, and began offering $1 memberships and free booze to bikini-clad women topped off by nude sunbathing on the upper deck of the yacht.

Churchill sold illegal liquor and was known to poach lobster out of season to supply his club. By this time, local chatter about the illicit goings in the Stiltsville houses had hit an all time high. The Florida Beverage Commission raided the Bikini Club in 1965 and shut it down while local law enforcement conducted a series of raids on some of the other establishments. and later hurricanes and fires ended the party for most of the clubs.

By the early 1990’s there were 14 Stiltsville houses remaining in the shallows of Biscayne Bay, passed down through the generations by family members but now under the jurisdiction of the Biscayne National Park. Hurricane Andrew in 1992 reduced the Stiltsville houses to the 7 that remain today.

Stiltsville Houses Today: A Hidden Gem and Iconic Image of Miami’s Past

Visiting the remaining seven Stiltsville houses today takes you back to a nostalgic and somewhat illict Miami past, all set against the gleaming and ever-growing Miami skyline.

The history of the Stiltsville houses is rooted in the culture of Miami and continues to be a fascniating mecca for today’s visitors. The houses have been featured in films including Miami Vice, Bad Boys II, The Absence of Malice and novels by the likes of Carl Hiaasen and Les Stanford among others.

Miami’s stunning Perez Art Museum, located on the waterfront in downtown Miami was designed by world class architects Herzog & Meuron after being inspired by the Stiltsville houses during a visit.